Can a Superhero Inspired Game Solve the Climate Crisis?

I sit down with “ecopreneur” Alfie Rustom to learn about his plans to motivate superhero fans to restore climate through gaming.    Bioman’s Forest Garden is a farming simulation game that empowers players to take constructive action against climate change; in both digital and real realities.

Bioman™ is a new visionary superhero franchise that explores what it means to be human in the 21st century. It evolves our understanding of our relationship with nature and technology. The eponymous novel was unleashed on Earth Day 2018 and was listed by the publishing industry’s gold standard, Kirkus Reviews, as one of the best books of 2018. You can think of it as Avatar meets Spiderman.

Why does the world need another superhero?

The world doesn’t need just another superhero, the world needs a cadre of superheroes that are aligned with a purpose beyond the box office.  A purpose-driven superhero franchise with global reach could help mobilize a global population currently in danger of being paralyzed by eco-anxiety.

Tell us more about eco-anxiety, and how gaming can help?

According to the U.N., we now have less than 11 years to prevent catastrophic climate change.  And, as extreme weather events start sweeping across the globe, worry about the climate crisis is affecting more and more people.  Today, 70% of Americans are “worried” about climate change and 51% feel “helpless.” With no framework for treatment, eco-anxiety is fanning the flames of our global mental health crisis.

We saw a hint of this story potential with James Cameron’s eco-myth, Avatar.  Where we were given a view of what life connected with nature could look like.  I struggle to think of any other media franchise that is doing this.

Sounds great, but what kind of game can alleviate eco-anxiety?

I see eco-anxiety as a form of learned helplessness. Psychologists know that we can transform learned helplessness through setting and achieving goals. This provides a sense of control over outcomes – especially as players begin to meet those goals on a consistent basis.

Games are perfect for this first step.   With gaming being the fastest growing media platform in the world, we can reach the greatest number of people. And games, unlike standard two-hour movies, can be played for years with new content being delivered continuously.

Specifically, in Bioman’s Forest Garden you are a climate refugee in a camp on the edge of a forest devastated by industrialization and climate change. The player has to use robots and drones to transform the dying forest into a biodiverse and bountiful forest garden.

Based on principles of sustainable agroecology the game teaches players how to plant and nurture forest gardens. Players then harvest the plants to craft food, medicine and other goods that are in short supply in the camp.

In addition, we will generate real-world impact through our partnership with Tree Nation. The partnership will allow players to plant real trees through the game and monitor the CO2 offset. CO2 leaderboards will gamify tree-planting.

Finally, the game is social and designed to get players to collaborate in the game to tackle the worst effects of climate change.   We also will offer an opportunity for our players to come together in the real world to volunteer in urban gardening/farming projects.

How will you use blockchain?

Blockchain will serve as a ledger that maintains ownership of non-fungible tokens (NFTs).  These tokens are attached to individual digital assets within a game.  This allows digital collectible items to be bought and traded with clear provenance of the asset. This eliminates the risk of fraud and provides the potential for digital assets to be used interchangeably between games.

Cryptokitties was the ground-breaking blockchain game that allowed people to buy digital cats — breeding them to create more unique and rare cats. Cryptokitties showed the possibilities of how these assets can be used across games, creating an ecosystem of independent developers building new experiences on top of it.  According to some estimates, the game had 1.5 million users who were responsible for $40 million worth of transactions on its platform. Individual cryptokitties have sold for more than $300,000 a piece.

In comparison, in games like Fortnite, players spend money on digital assets like cosmetic skins, dance moves, etc. that they don’t own. And, if the game shuts down then they will lose all their investment in the game assets. NFTs eliminate platform risk.

Where are you now?

The game is in pre-production and I’m partnering with one of the top mobile free-to-play game designers in the world. He designed FarmVille and is passionate about permaculture and sustainable farming.  Farmville generated 700 million installs and over a billion dollars in revenue. With that player base and those revenues, we can generate a significant impact.

The movie adaptation of the critically acclaimed novel is in the final stages of development. The former chief creative of DC comics consulted on the script and the film is slated for release on Earth Day 2022. 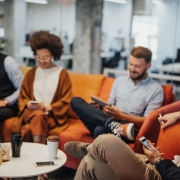 MILLENNIALS ARE DRIVING THE DIGITIZATION OF FINANCE

Breaking the Barriers - How Blockchain Can Make You Healthier and Richer

The Rise Of Smart Securities And Private Blockchains

WTF is Happening? Hard Tech Female Founders Are On The Rise Early Stage Technology Funding In The Time Of Coronavirus
Scroll to top
Stay in touch.