Recently, a woman told her story of being virtually groped in a leading virtual reality (VR) game called QuiVR. When she entered the game’s multi-player mode, a fellow gamer named BigBro442 began to fondle her Avatar. Now the company purposely built the game so each Avatar is physically gender neutral but they did allow these beings to have the player’s individual voice. When the woman began playing, her fellow combatants realized she was a woman after hearing her speak and BigBro442 decided it would be acceptable (and probably funny) to virtually sexually assault her. The woman explains the assault in detail through her blog on Medium.

QuiVR developers Henry Jackson and Jonathan Schenker found out about this situation and went to work fixing the problem. Yet this remains a serious issue in the VR world. Women in business have faced decades of harassment and gender inequality in blue chip industries such as law, advertising and the financial sector, but we need to now also pay close attention to virtual reality, and all of Silicon Valley for that matter.

Is harassment in the VR arena the same as in the workplace? The real question should be: does it really matter? It’s difficult to completely eliminate the possibility of this kind of unfortunate event, but what is vital is the need to offer the tools to re-empower the player in real time as it’s happening.

Jesse Fox, an Ohio State University professor who researches the social implications of virtual worlds said, “It wouldn’t be different if someone sent you a harassing email to your work email or harassed you in a chat room.” But Fox warns that virtual reality opens the door to a new level of violation.

“What’s different about virtual environments is an extra layer of immersion. If you are being groped in the real world versus a virtual world, the visual stimuli do not differ,” she said. “You are seeing it. It is appearing to happen to your own body. Those layers of lifelike experience are going to be more traumatizing in that moment.”

As harassers begin to be singled out and ostracized in the real world do we now face a rising tide of VR sexual assaults? Will these worlds allow the anonymity that abusers will see as a “safe haven”? And will these technologies become male-only because women are going to feel as triggered and traumatized in the VR space as they do in the real world?

Here are the first two steps that need to occur: First, game developers need a clear understanding and admission that there is a problem. And, second, they need to create a solution that will ensure every gamer, no matter their gender, feels comfortable in multi-player games. The fix for the game mentioned above was to create a virtual “bubble” to be placed around the player during the game. Other solutions include VR experiences eliminating all individual gamers’ personal characteristics, specifically instituting a gender neutral voice.

The bubble that is now featured in QuiVR may, on paper, look like a tiny fix, but the key here is that the creators and developers are now understanding that they need to foster as safe of an environment in VR as they do in their company’s offices. Change will only happen and it is indeed happening, when all developers come to that realization.

But what isn’t being discussed as a solution is one that quite possibly could be the most effective. Women have made great strides in becoming more represented in every level of corporations and organizations and having women involved in every phase of the development and implementation of VR games and platforms could be the true game changer. Right now the industry is so male-dominated that many developers simply fail to understand or completely ignore situations in VR that women may find objectionable and rightly label as harassment. Having women involved in the development and beta testing of this content would greatly eliminate the possibility that female users would suddenly find themselves in uncomfortable or emotionally damaging situations.

As a side note, part of the allure and the promise of VR was that it would enable the viewer to completely understand the subject matter by actually becoming a part of it. A documentary filmmaker, for example, can detail the horrors that animals face in factory farms but the empathy level is expanded exponentially when he or she also includes a virtual reality experience. The recent production, I Animal, from the group Animal Equality places the viewer directly in a factory farm so they are fully immersed in the experience.

Studies have shown that women are generally more empathetic than men so doesn’t it make sense that women should make a significant contribution to VR content that is so heavily rooted in empathy? Change will only happen when CEOs in the VR space realize the importance of including women on the ground floor of these emerging technologies. 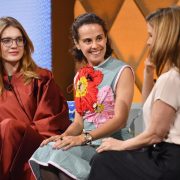